Bringing Bikes Back on Road

When the Mandeveli duo - Dr R Madhavan and Mr V Subramaniam – used to go round Chennai streets on a tricycle, to plant the saplings on vacant space, they were looked upon as objects of public curiosity, even ridicule. The sight of your family doctor and his banker friend taking to tricycle didn’t fit in with our class perception. Bicycle was(and still is)seen as poor man’s transport. This was over two decades back.

More recently,I suggested to Sapgreen’s Ashwin that they could take to tricycle for transporting saplings. The three-wheeler should be painted in company colour with a green message. Visualising Anil-Ashwin riding a tricycle on Mysore streets with a bunch of saplings for planting,I thought it to be a marketing idea worth a try. Besides being cheaper than power-driven light-cargo vehicles use of the green tricycle would give Sapgreen much needed visibility. Ashwin gave me a polite hearing and a disarming smile. 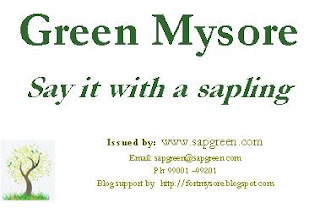 Perhaps, we need to work more to promote the humble bicycle as a ‘cool’, green option. The pedal-powered bike needs to be re-invented to make a social statement. There is, perhaps, case for an ad. campaign, showing M S Dhoni going on a bike to have a haircut in his native Ranchi. Those organizing fund-raising runs for varied causes could encourage participants to do it on bicycles.

Blogger Tanay Bahera in a recent post referred to a tricycle devised to carry-and-purify water as you ride it. The model, in its current form designed by its California-based innovators, may be expensive for adoption in poorer countries that need it most.

But the California design for a tricyle looks slick and stylish; and can be modified as ‘pizza’-carrier. Home-delivery pizza joints in Mysore and other smaller towns can replace delivery motor-bikes with fiber-glass finish tricycles. Food-World and other big stores can customize tricycles to suit their home-delivery requirement.
Posted by GVK at 7:04 PM

You know, GVK, May 10 was observed as National Cycle Day in the Netherlands? About 360 cycling routes are marked for use by locals and tourists. What a perfect 'Use no gas-leave no fumes' kind of day. For starters, compact localities and townships can think of emulating this idea.