Our morning walk in Mysore takes us along Baden Powell Public School; and I have often wondered if the basketball court on the school ground has ever been used for the purpose of playing basketball. I have seen the space being used for parking standby power generator, delivery vans and spares whenever they hold consumer fairs on the school ground. 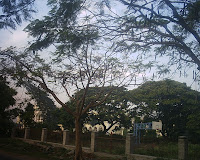 Maybe such willful waste of sports infrastructure is perpetrated with the school’s sanction. In which case one would wonder why the basketball court was created in the first place. Shouldn’t the authorities consider dismantling the sports fixture for installing them in any of the so many poorly-served schools in the city? Educational and other public institutions would do well to carry out periodical audit of the use put to their public facilities.

Infrastructure audit by the government and public institutions would ensure proper use and better maintenance of facilities developed with tax-payers money. At times, scarcely needed public facilities are created in the name of social infrastructure.

Many apartment blocks that have come up in Mysore in recent months include a community swim-pool as a value-added feature. I wonder how many residents in a complex use the facility. The idea of locating a public swimming in the midst a residential complex may not fit in with our middle-class mindset. Property developers nowadays factor in the cost of social infrastructure such as a gym, club-house and swim-pool, in pricing apartments. Seen as symbol of upscale living such value-add-ons are of little use to most apartment residents. 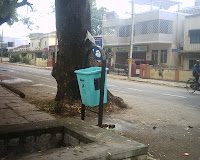 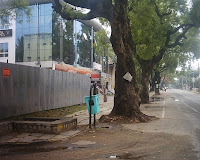 Such fancy trash can, installed by the Mysore city corporation in many places, is an instance of wasteful infrastructure. I wonder how these pricy plastic cans facilitate municipal trash collection.
Posted by GVK at 10:07 PM