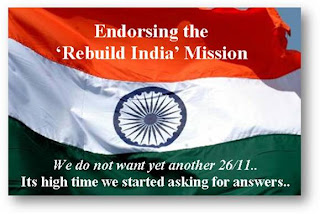 Ashutosh Didwania and his team have given a call to all right thinking people for suggestions for “Rebuild India” mission. “We need to form a core group of people who would decide on the subsequent plan of action. Since you all have contributed to the forum, I would request you all to pitch in and suggest as to how do we proceed from here on and make the mission a successful one.”

Here are 10 factors that need attention and implementation as soon as possible:

1. India is a democratic country so vote we must. In the coming elections none of us must sit at home. All eligible voters must compulsorily cast their vote to dislodge the non-functioning politicians sitting there at the top.

2. The top portfolios must be filled with people qualified for the post. Portfolios like ‘Defence minister’ and ‘Home minister’ should go to defence personnel, just as Manmohan Singh a non-politician had been roped in to head the finance ministry in 1991. A defence personnel as home minister would definitely not have taken six hours to send commandos to Mumbai, that too all in one single aircraft.

3. Air Defence should be given the top most priority now.

4. Another immediate step to be taken: All Pakistani passport holders must be sent back to their country, a thorough combing operation to be carried out all states of India, deport all refugees back to their respective countries, issue National Identity Card to all Indian citizens. Every villager in the remotest village should be proudly able to display their identity card.

5. The border areas have to be given high security for 24 hours, 365 days. Communication equipment provided should be of latest technology.

6. Money allotted to Defence ministry should be put to right use. The arms and ammunition provided to security personnel should be of latest technology. The terrorists had better bullet proof jackets than our officers. It pained me to see the Maharashtra police men fumble with decades old rifles.

7. Government should issue directives to the citizens how to conduct in a public place to face any kind of emergency. And these directives should be issued in regular intervals. No sensitive information received should be taken lightly.

8. Government should issue directives to the media how to conduct itself in case they are covering emergency. Nobody wants a ball by ball commentary in such situations.

9. Any politician found preaching communal hatred and sowing seeds of disharmony should be banned from entering politics and dealt with severely. They should be urged to give up their high level security.

10. Rehabilitation centers should be se up to take up the cause of families who have lost a family member in mindless violence. Emotional and financial support should be provided to those left behind.

Your chance to pitch in and contribute to the nation.

very good effort. If I may add couple of specific points:

1. Get Dawood Ibrahim come what may. He is SINGULARLY responsible for all the havoc post Babri Masjid event, was a local man and still controls mumbai thro' police, politicians and Builders. If we can nail him, 50% acts of terror in our country will come down.
2. Don't expect US OR UK to help us out. Pakistan is sending supplies food etc to 30000 Western Troops in Afghanistan Border DAILY.Even if some 1000 American tourists die, US Govt. will not bother. Condolizza Rice came running here not to offer condolences, but to make sure we don't attack Pakis as Pak would blackmail them further wrt supplies!Let's befriend Israelis for help in combating terrorism by getting latest eqipment from them.