September 9 was the 95th birthday of the prolific Thamizh writer, Devan, whose immortal creations include ‘Thuppariyum Sambu’. When ‘Kizhakku Padippakham’ decided to republish five books of Devan, writer Charukesi, who heads the Devan Memorial Trust, decided to make it an occasion. With Badri Seshadri of New Horizon Media Private Limited, (of which Kizhakku Pathippakam is a part) extending his full cooperation, Charukesi made it an evening to remember.

Cricket lovers will remember Badri as one of the founders of CricInfo.com

The highlight of the day was a first. The opening speeches were followed by the dramatised reading of a short story by Devan, called ‘Parvathiyin Sangalpam’, by Gurukulam Boys’ Company. No sets, but the cast did have a bit of make up on, and wore costumes to set the play in the 1950s. They each had a copy of the play from which they read out their parts, well, acted their parts would be more appropriate. Obviously the cast had had no time to learn the lines by heart, since the function had been organised in a short four days, and the deficit was camouflaged by this ploy. The reading took about an hour. The actors were all amateurs, busy with other professions - one of the ladies works with BSNL, another person at a bank, and the young girl is a student at REC, they said. More details of function here.

The dramatised reading gave me an idea. What if more Thamizh works were dramatized and recorded on audio cassettes, with the actors reading out the parts - in today’s culture of ‘No time to read’, they might go down well with booklovers. (Just like the audio cassettes of famous novels which are so popular in the West). And many may be tempted to actually read the originals. 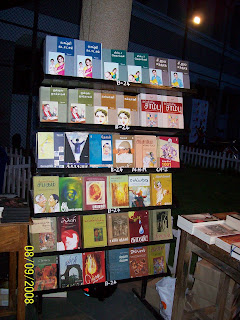 Posted by RAJI MUTHUKRISHNAN at 9:33 PM

Audio books are a great idea. What a joy to hear someone read aloud if they read well.

Not only the Tamil woks, the works in other languages to should be recorded. Great thought!